The median sales price of existing single-family homes in the Tucson Metropolitan Statistical Area (MSA) increased by 7.1% last year. That resulted in a 12-year high with prices at $238,900. Home prices have steadily increased in Tucson and across the nation since the end of the Great Recession. When compared across 12 western metropolitan areas, Tucson had a relatively low median home price with only three of the peer MSAs measured on the MAP posting lower prices (see Figure 1). El Paso posted the lowest median home price in 2019 at $164,400, followed by Albuquerque and then San Antonio. San Diego’s median home price was so high it was off the gauge at $645,000. While Tucson has posted a steady increase in home prices since 2011 it has yet to surpass its pre-recession peak. 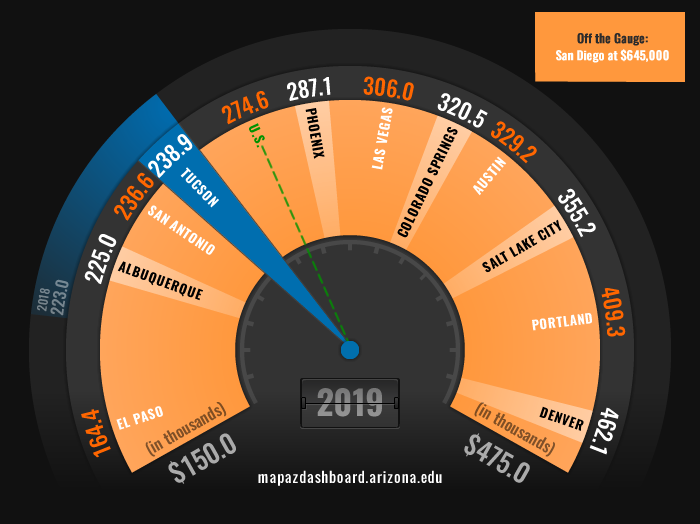 Tucson’s relatively low median home price makes it a relatively affordable place to buy a home for those earning the local median family income. When compared to the nation and Phoenix, Tucson is substantially more affordable. To learn more about how affordable housing is in Tucson visit the MAP indicator on Housing Affordability (link).

Home prices reflect supply and demand in the housing market which in turn can echo the general economic health of an area. Several factors can influence home prices, including population growth, mortgage rates, construction costs, and the business cycle. The home is the largest asset for most people, and the price of a home can affect spending in other areas. Since personal consumption makes up the better part of the economy, and discretionary income levels are influenced by the cost spent on housing, home prices are an important factor in the local economy.

Price fluctuations in Tucson between 2000 and 2019 followed roughly the same pattern as the nation. Home prices nationally began a rapid rise around 2004, peaking in 2006, followed by a large decline during the Great Recession (see Figure 2). Home prices across the nation have been steadily increasing since 2011.

Tucson home prices followed the same general pattern but had an even steeper rise and fall. Median home prices bottomed out for Tucson in 2011, decreasing 45.1% from the peak in 2006, and have since risen 77.6% since hitting bottom. While Tucson price fluctuations were more prominent than that of the nation, they were not nearly as volatile as prices in Phoenix.

The median price of existing single-family homes in the Tucson MSA has grown at a modest rate since the Great Recession. In the two years following the recession prices increased rapidly at approximately 12% per year and then stabilized near 4% for the next few years. Price increases accelerated again in 2017 with a growth of 10.5% followed by subsequent increases of 6.0% and 7.1%.

Tucson’s 2019 growth rate in home prices of 7.1% was the second-highest (tied with Salt Lake City) when compared to peer MSAs. Only Albuquerque had a higher growth rate at 9.4%. However, when exploring the average annual growth in home prices since the Great Recession Tucson falls near the middle of the pack at 7.5%. As Figure 3 illustrates, Tucson’s growth rate in median home prices in 2019 ranked comparatively high with Albuquerque leading the way and San Diego posting the slowest growth.

Tucson has not regained its previous peak in part because it was hit harder by the downturn, with prices decreasing by 45.1% between 2006 and 2011. The only peer metros hit harder where Las Vegas and Phoenix, which posted a reduction in median home prices by 58.1% and 55.1% respectively. Home prices in some peer metros remained flat during this period, as was the case in Austin.

Median home price represents the sale price of existing single-family homes for which half the homes sold for more and half for less. These data come from the National Association of Realtors (NAR), which tracks and compiles existing home sales from local associations/boards and multiple listing services nationwide. NAR differs from other measures that are designed to track repeat sales, such as the Federal Housing Finance Agency (FHFA) or S&P/Case-Shiller home price indexes, in that median home price can be strongly influenced by the mix of houses sold in an area.