6.9% - Tucson's cost of living below the nation 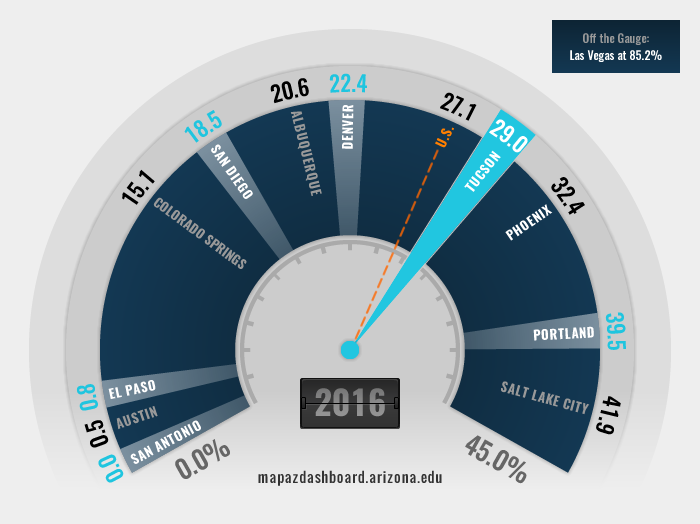 The growth rate in national park visits in the Tucson MSA was 5.4% in 2019. Since 2001, Tucson has seen some volatility in visits, with rates increasing during periods of economic growth and decreasing during the prior recession. Following the 2008-2009 recession, Tucson and Arizona experienced five years of growth in visits to national park located nearby. Visits declined significantly in 2018 but subsequently increased in 2019. Park visits remained steady nationwide between 2001 and 2013 followed by substantial increases in 2014 and 2016. The nation followed the same general pattern in 2019 as Tucson and Arizona with an overall increase in national park visits.

The percentage of federal recreational land is computed by dividing Type A, B and C federal lands by total land area for a geography. Type A lands include National Park Service, Fish and Wildlife Service, and Forest Service; Type B includes Wilderness Areas; Type C includes Bureau of Land Management and other Forest Service lands, as well as Oregon and California Revested Grant lands (OLM). Data are courtesy of a 2019 Headwaters Economics report. While aggregate land-use totals are accurate estimates as of 2016, data releases by agencies vary. Percent change in National Park visits is computed from National Park Service (NPS), Integrated Resource Management Applications (IRMA) Visitor Use Statistics, which are published annually.