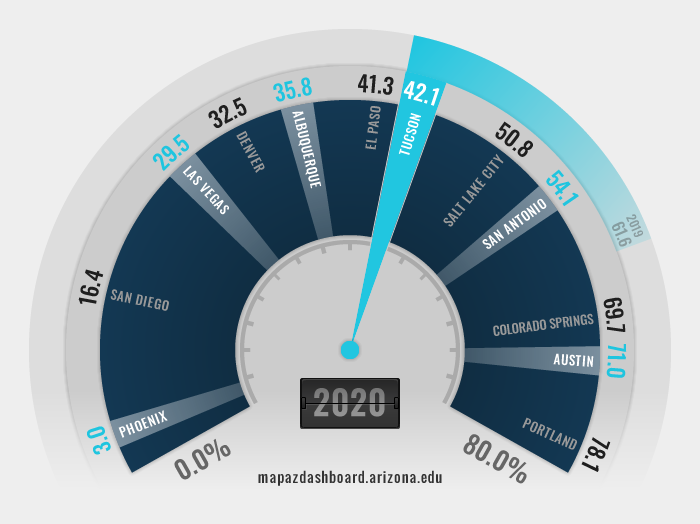 In 2020, Tucson’s air quality was rated “good” 42.1% of the time. This ranked the Tucson Metropolitan Statistical Area (MSA) sixth out of 12 western MSAs in the percent of good air quality days. Portland ranked first with 78.1%, while Phoenix ranked last with only 3.0% of days considered “good”. According to the Air Quality Index (AQI), good air quality days occur when air quality is satisfactory and air pollution poses little or no threat. The AQI has six rankings:  good, moderate, unhealthy for sensitive groups, unhealthy, very unhealthy, and hazardous. Tucson’s percentage of good air quality days in 2020 was a decline of almost 20 percentage points from last year’s rate of 61.6%. The prolonged smoke during fires in the Tucson MSA region contributed to the decline in air quality.

Air quality is vitally important to the well-being of a region’s residents. It is a particularly important health concern to those who have sensitivity to air pollution due to respiratory or other conditions. Air pollution can cause loss of productivity due to illness, as well as damage to buildings and crops, making it a hazard not only to the environment but also to the economy. Traffic congestion, smoke, and pollution from industrial factories and refineries all play a part in air quality.

The Tucson MSA posted 96.4% of days classified as good or moderate air quality in 2020, with 3.3% ranked unhealthy for sensitive groups, and 0.3% very unhealthy. Of the western MSAs, Phoenix reported the highest rate of very unhealthy days in 2020 at 20.8%. According to a report by the American Lung Association, Phoenix has a high level of Ozone which is brought on by warm temperatures. Very unhealthy days indicate a health alert in which all residents may experience serious health effects.

Air quality data come from the U.S. Environmental Protection Agency’s Air Quality Index Report, which is an annual summary of AQI values for four major air pollutants, though many areas do not have monitoring stations for all pollutants. The AQI has a range of 0-500 broken down into six levels: good (0-50), moderate (51-100), unhealthy for sensitive groups (101-150), unhealthy (151-200), very unhealthy (201-300), and hazardous (301-500).  The AQI for ozone was updated by the EPA in 2016, this update applied to all historical data.