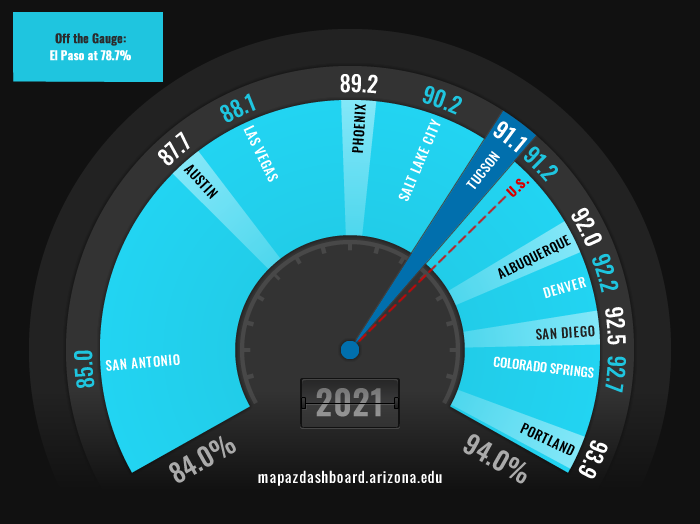 The Tucson Metropolitan Statistical Area (MSA) ranked sixth when compared to 12 western metropolitan areas in health insurance coverage, with 91.1% of the population having health insurance in 2021. Portland led the way with health insurance coverage rates at 93.9%. El Paso, at 78.7%, was off the gauge at the lower end of the range, significantly below San Antonio. In fact, the three lowest-ranking metropolitan areas were in Texas, which had the lowest percentage of the 10 western states by more than six percentage points. Insurance falls into two categories, public or private, and those in Tucson that do have insurance are less likely than the U.S. or Arizona to have private insurance.

Health insurance coverage improves access and quality of medical care to individuals and contributes to the overall health of the community. Those without insurance typically delay treatment and are more likely to seek care through emergency rooms or public hospitals, which increases the financial burden for states. Being uninsured or underinsured can be a great financial hardship for individuals who find themselves with a medical emergency or chronic condition that requires extensive medical support.

In 2021, the Tucson MSA, at 93.1%, and the state of Arizona (91.3%) had fewer insured children than the nation as a whole (94.7%). Tucson had health insurance rates similar to the U.S. for the percentage of the working-age population of 18-64 at 87.3%. Medicare provides insurance for most individuals over the age of 65, resulting in a high rate of coverage.

The Asian population had the highest percentage of health insurance coverage in 2021 for Tucson at 95.3%, as well as Arizona (93.8%). Nationally, the white, non-Hispanic population had the highest health insurance coverage rate at 94.0% but was followed closely by the Asian population. The Native Hawaiian and Pacific Islander population ranked lowest among races in Tucson. Those reporting their race as American Indian and Alaska Native, Other, or indicating Hispanic ethnicity followed closely. One caveat for this was that the Census classified those whose only health coverage was Indian Health Service as “uninsured”.

Tucson had a smaller percentage of individuals with private health insurance, 51.5%, in 2021 than either Arizona, at 55.4%, or the U.S., at 59.1%. Those indicating they were insured fell into three categories: public, private, or a mixture of private and public insurance. Those who have health insurance coverage through their employer or union, purchase insurance directly or have TRICARE plans or other military health plans are considered privately insured. Those insured through Medicare, Medicaid, Veteran’s Administration (VA), or any kind of government-assistance plan are considered publicly insured. Just over 21% of the population in Tucson had both private and public insurance. This includes individuals that have both Medicare and supplemental private insurance, for example.

Health insurance coverage estimates cover the civilian noninstitutionalized population, which excludes active-duty military personnel, as well as the population living in correctional facilities and nursing homes. These data are from the Census Bureau’s American Community Survey (ACS), which is a rolling survey that annually produces one-year and five-year estimates on demographic, social, housing, and economic measures.