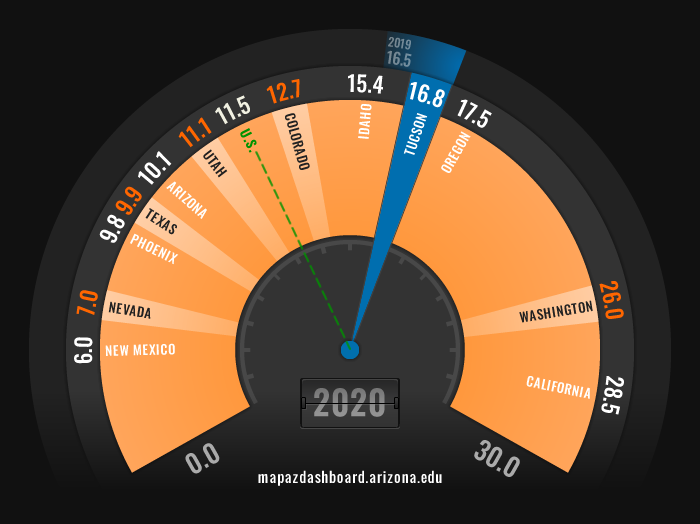 The number of utility patents per 10,000 workers is an important measure of innovative activity and technological change. A high rate may be indicative of firms’ propensity to invest in research and development (R & D). An increasing rate over time indicates that individuals and firms are seeking to improve the efficiency of their productive capabilities. Patent rates can also serve as a measure of entrepreneurial activity and collaboration between an educated workforce and local industry.

The Tucson Metropolitan Statistical Area (MSA) posted a rate of 17.4 patents per 10,000 workers in 2015. This rate ranked Tucson fourth among 12 western MSAs and was nearly twice that of Arizona and the nation. The San Diego MSA placed first with a rate 39.4 and the El Paso MSA placed last with 1.1. Tucson’s rate placed it just behind the Portland MSA, which had a rate of 19.5. Patent data for all MSAs is currently being updated. The most recent Tucson MSA and Phoenix MSA data is available below and on the comparison page.

The rate of patents per 10,000 workers is computed from the total number of utility patents granted by the United States Patent and Trademark Office (USPTO) and total nonfarm employment reported by the Bureau of Labor Statistics (BLS) Current Employment Statistics (CES) program.  Utility patents are issued for the invention of a “new process, machine, manufacture or composition of matter”, which grants the owner exclusive right to sell the invention for a period of up to 20 years. Utility patents are distinguished from others by providing some specific, substantial and credible utility.