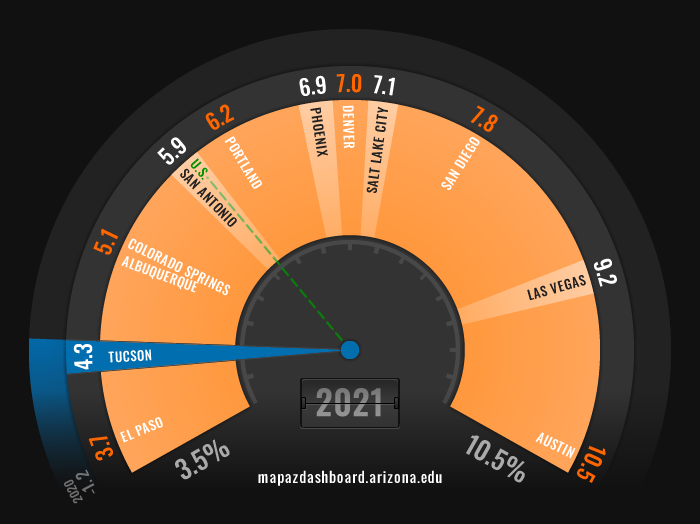 The Tucson Metropolitan Statistical Area (MSA) posted an increase in inflation-adjusted GDP of 4.3% in 2021. That placed Tucson eleventh when compared to 12 peer MSAs. Austin posted the largest increase in GDP during 2021 at 10.5%. GDP increased substantially in 2021 among all MSAs tracked, a quick rebound from the losses felt in the first year of the pandemic. GDP fell in 2020 due to the economic impact of the COVID-19 pandemic. Those impacts were felt the most in metropolitan areas with significant employment in the leisure and hospitality sector, like Las Vegas. Tucson’s increase in GDP in 2021 was significantly higher than pre-pandemic trends, at a sixteen-year high. However, Tucson lagged behind the state of Arizona’s GDP growth of 6.3% and the nation at 5.9%

GDP data are often used to illuminate the industrial structure of an MSA. Tucson has an unusually large share of GDP related to government activity, compared to Arizona and the nation. That reflects the concentration of federal civilian and military installations in the area, as well as the presence of the University of Arizona, which boosted activity in the state government sector.

Gross domestic product provides important information on the value of goods and services produced by labor and property located in a geographic area during a period of time. It is also one key measure of income flows to factors of production, like labor and capital. After adjustment for inflation, it tells us how economic output is growing (or not) over time. It also provides key information on the industrial mix of regions, so that we know what sectors are larger or smaller. In turn, this gives us key insights into how global and national events (like the federal sequester) may impact local growth compared to other areas.

The government share of GDP in the Tucson MSA was larger than the U.S. because the local area had larger shares in federal civilian, federal military, and state and local activity. Federal civilian and military activity in Tucson was roughly double the national average, as a share of GDP in 2016. The state and local GDP share was also larger in Tucson, reflecting the presence of the University of Arizona.

The Great Recession hit real GDP growth in the Tucson MSA hard, with a huge 6.6% decline in 2009. That was much worse than the U.S. decline of 2.6% but slightly better than the 8.3% decline for Arizona. Tucson’s real GDP growth rebounded in 2010 but has remained below both Arizona and national rates until 2016 when Tucson exceeded the national rate. Tucson’s contraction in GDP during 2020 was significant but not as bad as the losses felt during the Great Recession. Nationally, the decline of 2.8% posted in the first year of the COVID-19 pandemic was larger than the contraction of 2.6% during the Great Recession. Real GDP in Tucson, Arizona, and nationally recovered quickly in 2021 from the losses felt during the beginning of the pandemic. Tucson’s real GDP growth in 2021 was at a sixteen-year high.

Gross domestic product at the national level is measured both by spending and by income to factors of production (labor and capital). At the state level, measurement is by income to factors of production only. Thus, these data provide measures of GDP by industry, but not by the traditional spending components (consumption, investment, government, net exports). It is “gross” in the sense that it includes funds set aside to replace capital equipment that is wearing out. In other words, it includes depreciation. Metropolitan area data are derived from the state estimates by “sharing out” state activity by industry. Advance estimates use local data on wages by industry for this purpose, while revised estimates use earnings estimates. Advance data are subject to large revisions. GDP data come from the U.S. Bureau of Economic Analysis and is available annually for states, MSAs, and counties.