Percent of Residents Working From Home (2021) 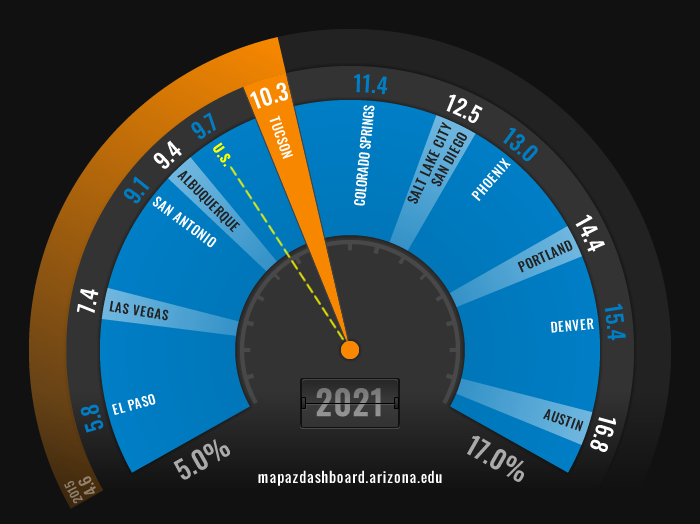 In 2021, 10.3% of residents in the Tucson Metropolitan Statistical Area (MSA) reported working from home. That ranked Tucson eighth among peer western metropolitan areas. Work-from-home rates skyrocketed during the beginning of the pandemic. Rates varied significantly among MSAs depending on the industrial mix and stay-at-home orders. Keep in mind that the data reported here are from a five-year survey and include several years of data prior to the pandemic.

Driving alone is the primary mode of transportation to work for most Americans, other modes such as bicycling, walking, carpooling, working from home, and public transportation have the potential to reduce congestion and mitigate the impact that driving alone has on the roadways. Those who drove alone in Tucson represented 73.4% of the population, while 9.7% of Tucson residents carpooled to work.

The prevalence of driving alone as the primary mode of transportation to work for most Americans has had tremendous economic, social, and environmental consequences for our nation. In an effort to mitigate these effects, recent transportation-authorization bills have required state transportation agencies to incorporate multimodal considerations into all new transportation planning and programming, through the Intermodal Surface Transportation Equity Act of 1991. Subsequent bills have expanded existing efforts and created new programs to foster alternative transportation options and decrease highway congestion. Examples include limiting the addition of single-occupant vehicle capacity and increasing funding for public transit, bicycling, and walking facilities.

The duration of one’s journey to work, as well as how they get there, reflects both quality of life and economic well-being for a region. Longer commute times are often indicative of a spatial mismatch between jobs and housing – a phenomenon that can especially impact low-income households, as their geographic mobility may be limited. Long commute times can also result from high housing costs, poorly planned transportation networks, and local regulatory policies such as exclusionary zoning.

In 2021, 73.4% of residents in the Tucson MSA reported driving alone as their primary means of transportation to work. This ranked Tucson seventh among 12 western MSAs, of which the Portland MSA ranked first, with the lowest percentage of commuters driving alone at 66.2%. El Paso ranked last with the highest percentage, at 78.6%.

The percentage of commuters driving alone decreased across Tucson, Arizona, and the U.S. since 2015. This is likely due to more individuals working from home due to the pandemic.