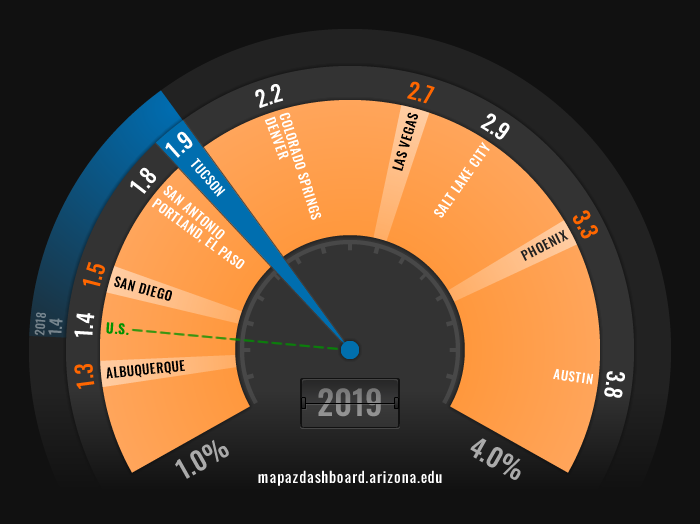 In 2019 the growth rate in total nonfarm employment for the Tucson Metropolitan Statistical Area (MSA) was 1.9%. In comparison to the 12 western MSAs, Tucson ranked seventh, which was a substantial improvement over last year. Austin posted the highest employment growth between 2018 and 2019 with a 3.8% increase. Phoenix was the only other MSA of the comparison region to have employment gains at or above 3.0%. Tucson posted slow but positive employment growth since the 2008 - 2009 recession. Tucson was hit hard by the last recession, with job losses totaling 8.4%. To view the preliminary monthly job data for Tucson, visit the award-winning Arizona’s Economy online magazine or download the free Arizona’s Economy smartphone app.

The rate at which total employment changes is a key indicator of the overall performance of an economy. Employment growth reflects a region’s ability to generate jobs, income, and economic opportunities for those living in that region. Slow job growth can lead to increases in unemployment, reduced wages for those employed, and a decline in overall economic growth. Employment growth, subdivided by industry, informs us what industries dominate the employment mix and how that mix is changing over time.

Employment by industry is estimated based on a survey of employers. It reflects the number of jobs at establishments located within an area. An individual that works at two separate establishments during a year will be counted twice. Employment data come from the Bureau of Labor Statistics Current Employment Statistics (CES). The CES collects monthly survey data on employment, hours, and earnings of workers on nonfarm payroll. All military data come from the Bureau of Economic Analysis (BEA).