Percent of People Living in a Household with Broadband (2021) 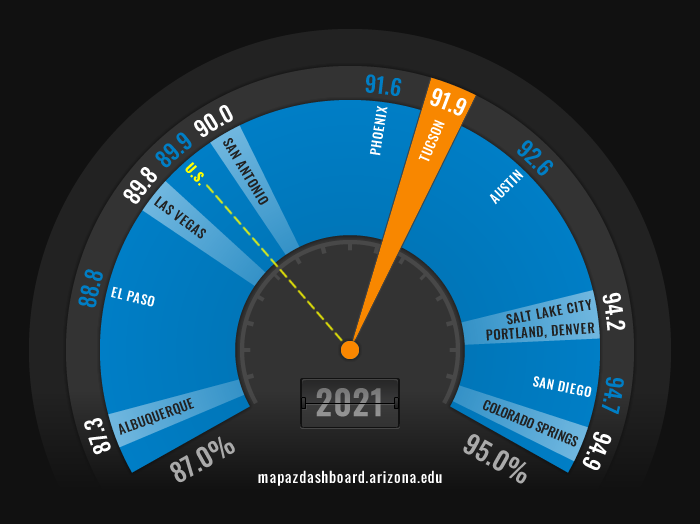 In the span of a generation, home computers and internet access have gone from novelties to necessities. Technology is now an integral part of our everyday lives. It is pervasive throughout how we do business and how we interact with businesses (such as online banking), as well as each other (such as social media). While the majority of U.S. households have online access through internet/broadband services, there are still those who do not – for reasons of availability, cost, or personal preference. The use of smart phones and tablets has supplemented, and in some cases surpassed the use of home computers. The availability of individuals to access online resources will be an important consideration going forward.

When comparing computer access by type for the U.S., state of Arizona, and Tucson the rate of those with dial-up internet was essentially non-existent. Of those without internet access in 2021, Tucson reported the lowest rate at 4.6%, while rates for the U.S. and the state were just under 6.0%. Tucson also had the lowest percentage of people living in a household without a computer at 3.3%, while the U.S. and Arizona had 4.3% and 3.8%, respectively.

Tucson, at 96.7%, had the highest percentage of people living in a household with a computer when compared to Arizona and the U.S. in 2021. The U.S. fell 1.0 percentage points behind at 95.7%, while Arizona lagged behind by 0.5. This measure represents computers, tablets, and smartphones.