Affordable Housing in Tucson? It Depends

How affordable is housing in Tucson? It depends on who you ask and what data you explore. In this article we review the key measures of affordability and what they mean for the Tucson region. Further, we will explore how the Tucson Metropolitan Statistical Area (MSA) compares to similar regions around the western U.S.

In 2018, the median price of a single-family home in the Tucson MSA was at an eleven-year high and up 6.0% over last year. While prices have steadily increased since the Great Recession, Tucson continues to have one of the lowest median home prices when compared to peer western MSAs. Home prices reflect supply and demand in the housing market which echoes, in part, the general economic health of a region. Home prices also influence how much discretionary income residents have to spend in other areas such as childcare. When it comes to affordability, home prices only tell part of the story. The income of the local residents is equally as important. Figure 1 illustrates the median home price for Tucson and peer MSAs. To learn more about how home prices in Tucson are trending visit the recent article “Home Prices Continue to Rise”. 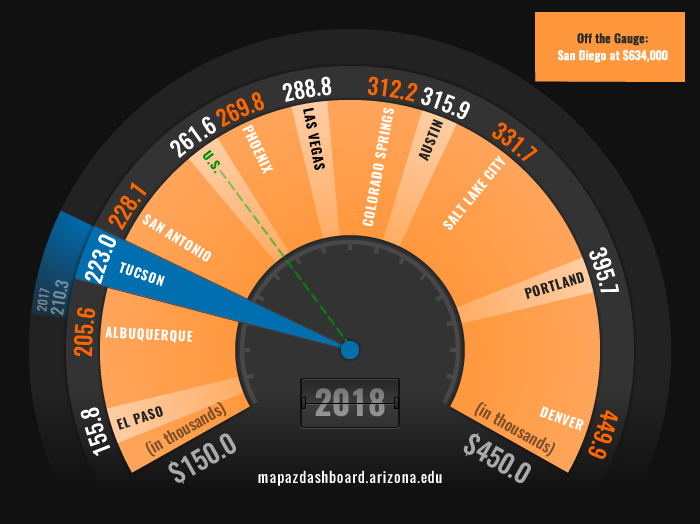 The MAP Dashboard reports two measures of affordability, one for homeowners and one for renters. The indicator Housing Affordability explores how affordable recently sold single-family homes are to someone earning the local median family income. In 2018, the median family income in Tucson was $60,000. This measure assumes that a family can afford to spend 28% of its gross income on housing. Tucson ranks second in housing affordability among peer western MSAs with 66.2% of homes sold in 2018 affordable to those earning the median family income (see figure 2). While Tucson’s affordability for homeowners has remained high among peer western MSAs it has decreased substantially over the past few years as home prices have increased faster than wages. 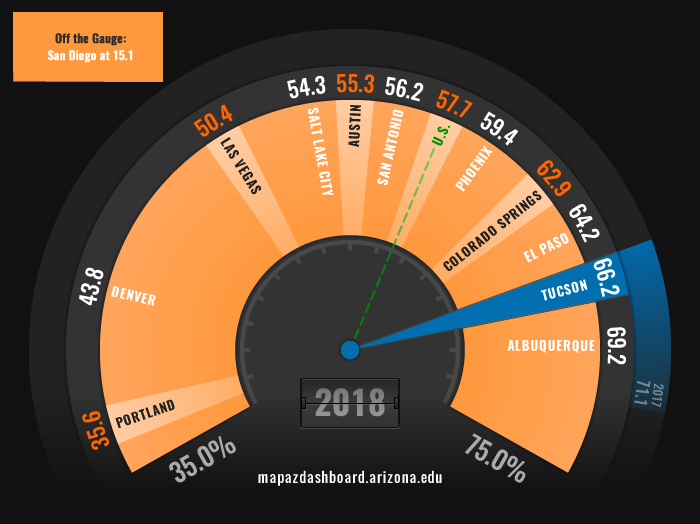 What does this mean for renters or those that earn less than the median family income? The MAP recently published a feature article "Affordable Tucson: How Do Renters Fare" that explores data published by the New York University (NYU) Furman Center on rental affordability. Unfortunately, renters in Tucson do not fare as well as homeowners when compared among peer MSAs in terms of affordability. As figure 3 illustrates, Tucson ranks second to last with 76.2% of available properties in 2015 considered affordable.

Figure 3: Share of Affordable Rentals for Those Earning the Local Median Household Income (2015)

It is important to note the difference in income measures used to calculate homeowner versus rental affordability. Housing affordability uses median family income, which consists of more than one person in the household related by birth, marriage, or adoption. Rental affordability calculations utilize median household income, which covers all households, including those with persons living alone or multiple unrelated individuals. These households tend to have a large percentage of young or old individuals. Family income is typically higher than household income. This is an important distinction particularly for Tucson, given the high percentage of retirees and college age students. In 2017, median family income was nearly $12,000 higher than median household income for Tucson.

So far we have illustrated how those median income earners fare among different housing affordability measures, but what about those in the lower income brackets. How affordable is housing in Tucson for them? In addition to the affordability measures, the MAP explores Housing Cost Burden for renters and owners, and by income. The income breakdown paints a very different picture for those in the lower and upper brackets especially relative to peer western MSAs. 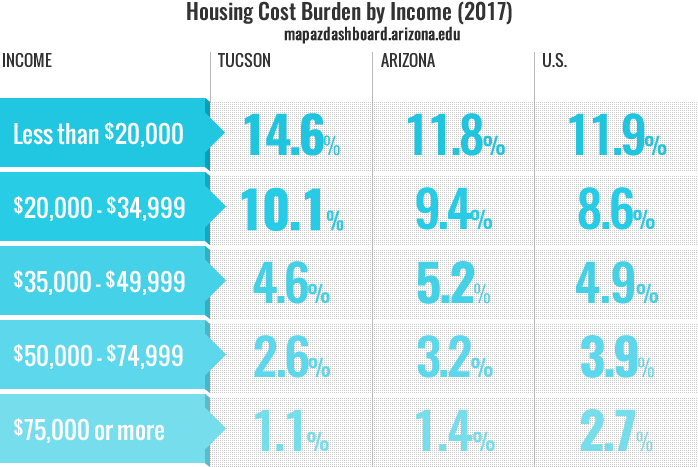 In summary, the Tucson region has relatively low home prices and monthly housing costs for homeowners and renters. However, prices and costs are only part of the story. The income of renters and homeowners is equally important. When factoring in income, we find that Tucson is affordable for homeowners that earn the median family income, however renters and those with wages in the lower income brackets experience a high level of housing cost burden when compared to peer MSAs. That begs the question, how do peer communities like Portland, San Diego, and Denver have a significantly lower percentage of cost burdened households at the lowest income level? One of many reasons may be that wage earners in the 10th and 25th percentile for those regions earn more. You can learn more about wages for Tucson and its peer metros in the indicator Wage Distribution.