Tucson jobs plummeted in the spring of 2020, as the pandemic caused disruptions across major sectors of the economy, as Figure 1 shows. With the lifting of the stay-at-home order, jobs bounced back strongly initially but then settled into a more gradual recovery. As of April 2022, Tucson jobs were 5,300 below their pre-pandemic peak.

One way of thinking about Tucson’s job recovery is to calculate the job recovery rate. This is just the ratio of job growth from April 2020 to April 2022 divided by the job loss from February to April of 2020. A value of 100% indicates that all of the jobs lost during the first two months of the pandemic have been restored.

Figure 2 shows Arizona job replacement rates by metropolitan area, as well as the state and the nation. As the figure shows, Tucson lost 45,500 jobs from February to April of 2020. Since April 2020, Tucson has added back 40,200 jobs for a job replacement rate of 88.4%. That was below the national rate and well below the recovery rates for the state as a whole and most metropolitan areas in the state.

The current estimates suggest that four of the state’s seven metropolitan areas have replaced all of the jobs lost during the February to April 2020 period: Lake Havasu City-Kingman, Phoenix, Prescott, and Yuma. As of April 2022, Sierra Vista-Douglas replaced 63.6% of the jobs lost early in the pandemic, Tucson replaced 88.4%, and Flagstaff replaced 92.2%.

Figure 3 shows that Tucson’s job recovery rate was also slow compared to the 11 other western metropolitan areas tracked on the MAP. 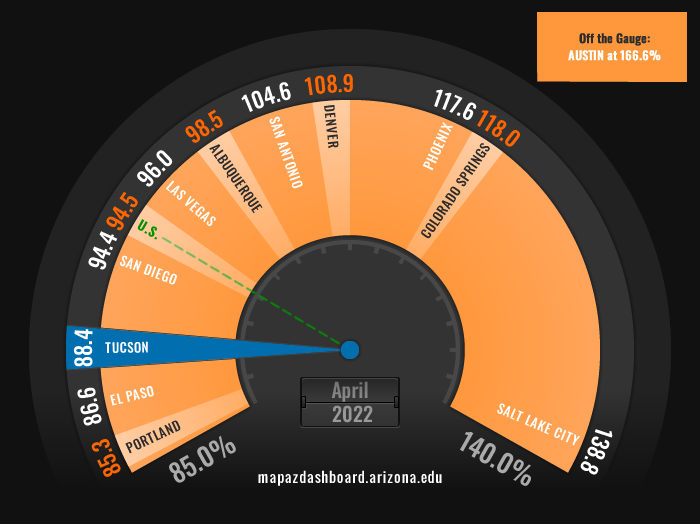 The job recovery has been very different across industries in Tucson. Figure 4 shows the change in Tucson MSA jobs by industry from February 2020 to April 2022. Professional and business services jobs were still down by 5,900, followed by government (down 4,600), information (down 1,000), educational and health services (down 900), leisure and hospitality (down 700), construction (down 400), and other services (down 200).

The U.S. Bureau of Labor Statistics does not provide full detail for the components of professional and business services, but it does publish non-seasonally adjusted monthly estimates for professional, scientific, and technical services (up 600 jobs from February 2020 to March 2022), and ASWMR services (down 7,400). Within ASWMR, jobs in employment services were down 1,900 and jobs in business support services (which includes call centers) were down 3,200. Part of the remaining job losses may be in services to buildings and dwellings (cleaning, etc.) which were reduced during the pandemic.

While Tucson jobs have not yet fully recovered, the number of employed residents did, if only briefly, recover late in 2021 (Figure 6). The data for employed residents come from a monthly survey of households and include residents with jobs as well as the self-employed, unpaid workers in family businesses, and farmers. The data on total nonfarm payroll jobs counts jobs on the payrolls of firms each month. The nonfarm payroll job data is generally more reliable than the household employment data.

Figure 7 shows seasonally-adjusted unemployment rates for Tucson, Arizona, and the U.S. These data also originate from the monthly survey of households. As of April 2022, Tucson’s unemployment rate was 2.9%, which was below the state rate (3.2%) and below the nation at 3.6%.

Another measure of labor market performance is the employment-to-population ratio. Unfortunately, we do not have monthly data for Tucson but there are monthly estimates for Arizona and the U.S. The data are calculated by dividing household employment by the non-institutionalized population age 16 and over. Note from Figure 8 that the state employment-population ratio tends to be well below the national average. In part, this reflects Arizona’s demographics, with a higher than average share of the population under age 20 and age 65 and older.

As of April 2022, the employment-to-population ratio had nearly recovered to pre-pandemic levels for both the state and the nation. Arizona’s employment-to-population ratio was 58.9% in February 2020. In April 2022, the ratio was 58.8%. That was nearly back to its February 2020 level but still below the national average of 60.0%. Overall, this indicator also suggests a relatively tight labor market in Arizona.

Arizona’s labor force participation rate has weakened recently because state labor force growth has slowed markedly, after rapid gains earlier in the pandemic (Figure 10). Individuals may leave the labor force for a variety of reasons: they wish to retire, they need to care for family or have become ill themselves, or they have stopped seeking employment altogether.

Data at the national level from the St. Louis Federal Reserve Bank suggests that retirements have risen significantly during the pandemic. Figure 11 shows the share of the population age 16 and older who are not in the labor force because they are retired.

Figure 11: Share of the Population Age 16 and Older Not in the Labor Force Due to Retirement

Figure 12: Share of the Population Age 16 and Older Not in the Labor Force by Cause

U.S. labor markets are very dynamic. Each month, large numbers of residents are leaving jobs while many others are being hired. During the pandemic, the U.S. and Arizona quit rate has surged. The quit rate is defined as the number of quits divided by total nonfarm jobs. Keep in mind when evaluating these data that the quit rate excludes individuals quitting to retire and those that are being laid off. As Figure 14 shows, Arizona’s quit rate is normally above the U.S. The figure also shows the significant surge in the quit rate in recent months. In March of 2022, 137,000 people quit their jobs in Arizona.

In addition to an elevated quit rate, we are also experiencing strong hiring performance. Figure 15 shows the hire rate for Arizona and the U.S. Note that the state hire rate tends to be above the national rate. While the state has seen a significant increase in the hire rate during the pandemic, this is primarily a return to the pre-pandemic normal, in contrast to the unusual surge for the nation. In March 2022, 155,000 people were hired in Arizona.

Overall, the data on labor market flows suggests that the state labor market is experiencing increased cross currents. Elevated numbers of workers are quitting while the hire rate has returned to its pre-pandemic level. This fits with anecdotal evidence that workers are quitting jobs in order to search for a better match with their skills and preferences. The pandemic has rendered some jobs less desirable, particularly relatively low-paid, high-personal contact jobs in travel and tourism. It appears that workers in these less-desirable jobs may be quitting to search for higher pay and/or jobs in other sectors, or deciding to retire. These decisions have been caused in large part by the pandemic and have been made feasible by the large increase in federal income support combined with increased personal savings generated by the drop in spending on travel and tourism and increased net wealth driven by solid stock market performance and rising house prices.

The pandemic has spurred an increase in automation. While there is little high-frequency data on automation, quarterly U.S. e-commerce retail sales give an indication (Figure 16).

The pandemic caused a huge surge of e-commerce retail sales in the second quarter of 2020, with an increase of $51.2 billion dollars. That translated into an over-the-year percent change of 52.7%. E-commerce sales have remained elevated in the ensuing quarters.

This shift to increased online sales has boosted investment in transportation and warehousing, with strong net job growth in that sector. However, this sector has already experienced significant automation and these trends are unlikely to abate.

Figure 17: Tucson MSA and U.S. Employment Shares in 2017 by Probability of Computerization

Tucson’s share of jobs at risk of automation was below the national average because manufacturing in Tucson is research oriented. That was driven by the presence of Raytheon and other research-oriented manufacturers.

The top three sectors in automation risk in Tucson were leisure and hospitality; trade, transportation, and utilities; and natural resources and mining. The three sectors least exposed to automation risk were education and health services; information; and government. Overall, industries and occupations that will face lower risks from automation are those that require advanced IT skills and programming, basic digital skills, entrepreneurship and initiative taking, leadership and managing others, creativity, and complex information processing and interpretation.

Figure 18: Probability of Computerization by NAICS Industry in 2017 for the Tucson MSA and the U.S.