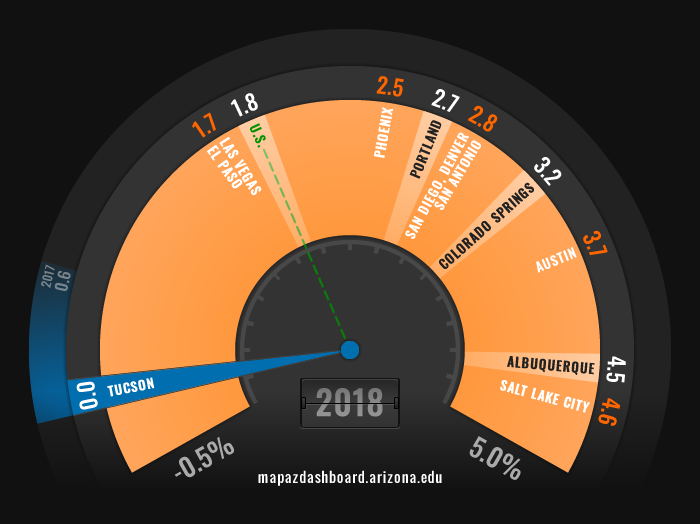 According to the latest data on business starts, professional and business services generated the most new businesses in the Tucson MSA (22.0% of the total), followed by education and health services (14.6%); financial activities (13.7%); and construction (9.7%). Manufacturing; information; and natural resources and mining generated far fewer new businesses. Slow gains in manufacturing and natural resources and mining reflect, in part, the capital-intensive nature of these sectors, which make industry entry and exit relatively expensive.

Tucson's business growth rate in 2018 underperformed the state's rate of 1.2% and the national rate of 1.8%. Business growth remains well below pre-recession levels for the state of Arizona and the Tucson MSA. However, since the Great Recession, Tucson and the state of Arizona have experienced an overall increase in the growth rate in total establishments. To explore starts, closures, expansions, and contractions for the U.S., western states, Arizona counties, and comparison MSAs visit the Comparison Page.

Estimates for the number of establishments come from the Quarterly Census of Employment and Wages (QCEW), a quarterly dataset maintained by the Bureau of Labor Statistics (BLS). QCEW data are obtained primarily from state unemployment insurance programs. The QCEW captures approximately 97% of all wage and salary civilian employment in the county. The data exclude those not covered by unemployment insurance: self-employed workers, most agricultural workers on small farms, all members of the Armed Forces, elected officials in most states, most employees of railroads, some domestic workers, most student workers at schools, and employees of certain small nonprofit organizations (BLS, Quarterly Census of Employment and Wages Frequently Asked Questions).

Estimates of business starts, expansions, contractions, and closures come from Statistics of U.S. Businesses (SUSB), an annual datasets maintained by the U.S. Census Bureau and extracted from the Business Register. This datasets cover businesses that generate most of the country's economic activity. The data exclude non-employer businesses, private households, railroads, agricultural production, and most government entities.