Who Can Afford a House? Housing Affordability Declines

Housing affordability in the Tucson Metropolitan Statistical Area (MSA) was the highest among western peer metros at 74.7% in 2020. That means nearly 75% of single-family homes sold in 2020 were affordable to someone earning the local median family income. Will Tucson remain affordable as the housing market booms? Early data suggests that Tucson, along with peer MSAs across the West, will see significant declines in housing affordability.

Housing affordability measures are primarily made up of two factors: home prices and local family income. Home prices have skyrocketed in the Tucson MSA over the past two years. The median price of a single-family home in 2020 was up 11.0% and the monthly data suggests we will see an even larger increase year-over-year for 2021. While home prices have shot up rapidly, incomes have not kept pace, which can create an affordability problem. For reference, the median family income in the Tucson MSA for the most recently available data (2019) was $72,920. It is important to note that family income is typically higher than household income. This is a particularly important distinction for Tucson given the high percentage of retirees and college-age students. 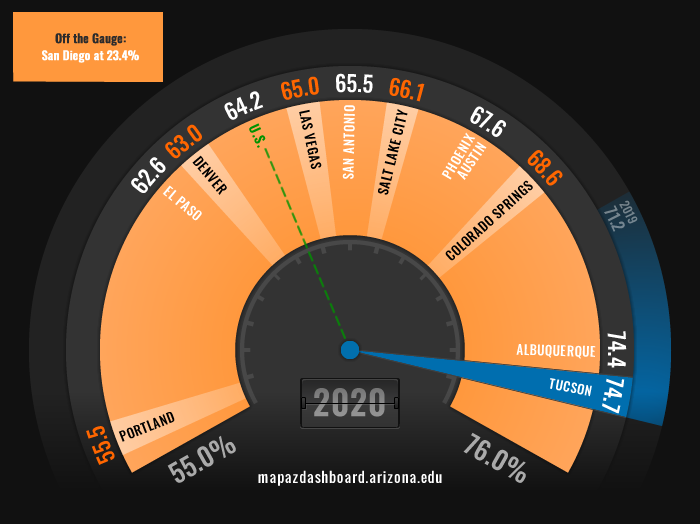 Housing affordability is calculated by two primary factors: home prices and income. Therefore, it is important to track changes in these factors to provide insight into the underlying driving force of affordability.

Trends in family income also have a big impact on housing affordability. According to the income and poverty report released by the Census Bureau, median family income nationwide declined by 3.2% between 2019 and 2020. With rapid gains in employee compensation in the second half of 2021, we may see some improvement in income growth this year. However, housing affordability will continue to decline if home prices continue to outpace income.

Stay tuned to the MAP Dashboard for updated housing affordability and home prices as the annual data becomes available. To explore some of the factors driving the steep rise in home prices, such as historically low inventory, visit Arizona’s Economy.