Tracking the Pandemic Eviction Crisis: Temporary measures delay the pain for renters but not landlords

There have been increasing concerns that the COVID-19 pandemic will cause an eviction crisis across the country. A recent report “The COVID-19 Eviction Crisis” published by the National Low Income Housing Coalition estimates that 30-40 million people in America could be at risk for eviction in the next few months. This is a particular concern for Arizona which already had high eviction rates before the pandemic began.

In late March, at the beginning of the pandemic, the Federal Government issued orders through the Coronavirus Aid, Relief, and Economic Security (CARES) Act to temporarily delay evictions of renters who were unable to pay their rent. While the temporary ban helped keep renters from being evicted it did not stop them from accumulating rental debt because they were still legally obligated to pay missed payments. The moratorium on evictions created by the CARES Act expired on July 31st, after which landlords could issue a 30-day notice for tenants to vacate properties.

Following the expiration of the CARES Act, the Center for Disease Control (CDC) issued a declaration on September 4th that temporarily halts evictions through the end of the year. The CDC notes that evictions of tenants could be detrimental to public health control measures that are in place to help slow the spread of COVID-19.

When exploring eviction trends since 2000, all western states, except Texas, posted eviction rates that were lower in 2016 than during the early 2000s. Arizona and Nevada have posted the largest declines since 2000, with eviction rates falling by 2.9 and 3.8 percentage points, respectively (Figure 2). Idaho has consistently reported one of the lowest eviction rates among western states. The national rate has remained relatively stable ranging from 2.3% to 3.1%.

Limited data is available at the county or metropolitan level for evictions from Eviction Lab. They do, however, have data for the Tucson Metropolitan Statistical Area (MSA). The Tucson Metropolitan Statistical Area represents the same geographic region as Pima County. In 2015, the eviction rate for the Tucson MSA was 5.1%, which was 1.2 percentage points higher than the state and almost double the national rate (Figure 3). Tucson’s eviction rate has declined since 2000, from a high of 7.0% in 2005 to a low of 3.9% in 2014. The Eviction Lab has limited eviction data for cities and places located in the Tucson MSA region. To explore the more detailed data visit Eviction Lab.

The Eviction Lab reports that filings for evictions in Maricopa County have fallen sharply since April when a temporary eviction ban went into effect (Figure 4). Note that the figure depicts total filings relative to the average for that month. Thus, filings in July 2020 were roughly 20% of normal for July. In addition, data used to create Figure 4 include all filings, not just those that have been processed and received a judgment. These data will be a key indicator to track as the temporary bans are lifted on evictions. 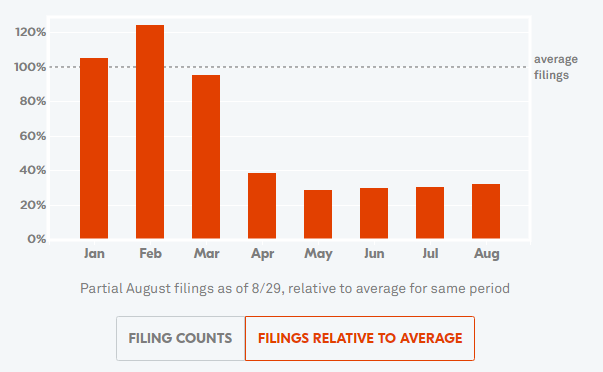 *image courtesy of the Eviction Lab website for Maricopa County

Also, the moratorium on evictions has had consequences that extend beyond renters. According to a recent report by the Brookings Institute, “An eviction moratorium without rental assistance hurts smaller landlords, too”, finds that 40% of residential property units are owned by individual investor landlords. Further, they find that among those owning residential investment properties, roughly a third are from low-to-moderate-income households which rely on rent for up to 20 percent of their total household income.

Stay tuned to the MAP Dashboard for an update on eviction data and additional analysis on housing as the moratorium expires and more data becomes available. An additional resource at the University of Arizona is “The Cost of Eviction Calculator” developed by a group of students in the Innovation for Justice Center at the James E. Rogers College of Law. The eviction calculator allows you to estimate the cost of eviction for your community. Their work builds on existing eviction cost literature.