There are many ways to evaluate economic performance. Three key dimensions are innovation, inclusion, and growth.

Innovation is a key driver of economic progress. It generates new products and new ways of producing goods and services. One way to measure innovation is by labor productivity. The Brookings Metro Monitor features one such measure for the 192 largest U.S. metropolitan areas in the U.S. It estimates the economy’s overall productivity by dividing Gross Metro Product (GMP) by the total number of jobs. 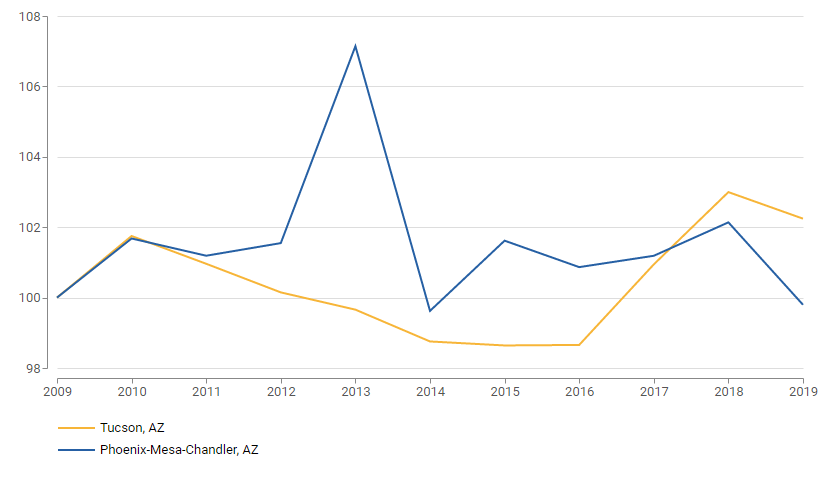 Racial inclusion on the Metro Monitor measures the gap between the non-Hispanic white population and people of color. The following indicators are included in the racial inclusion measure: median earnings, relative poverty, and the employment rate.

Geographic inclusion indicators measure changes in the gap between the most advantaged (top 20%) and least advantaged (bottom 20%) of census tracts in each metropolitan area for the following indicators: employment rate, median household income, and relative poverty rate.

As for geographic inclusion, Tucson did not place as well among the 53 largest metros. Tucson ranked 21st and fell behind San Antonio, Denver, and Salt Lake City when compared to the large peer western metros.

The third dimension of economic performance is growth. Fast-growing regions tend to be dynamic and generate more economic opportunities for residents than slower-growing regions. While Tucson ranked relatively well in the geographic and racial inclusion measures, it did not fare well in the overall growth index. Tucson ranked 49th out of 53 large metros when measuring the change in the size of the economy and entrepreneurial activity. On the Metro Monitor, the measures included in the overall growth index are the total number of occupied jobs, the total value of goods and services produced in the metropolitan area, and the number of jobs at young firms. Figure 3 highlights the ranks and values for Tucson’s growth index. 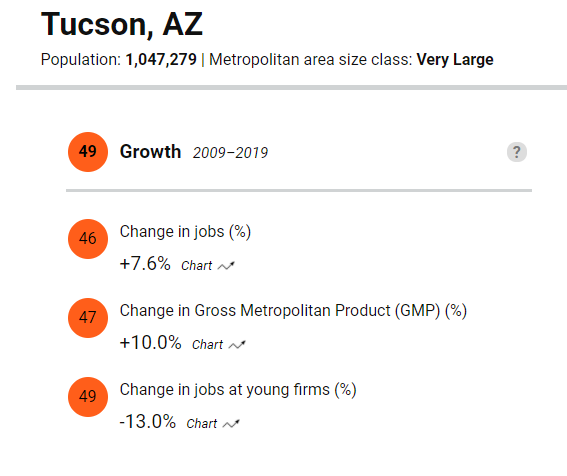 Brookings recently added a Metro Recovery Index that includes data on a variety of measures to estimate the impact of the pandemic and the trajectory for change. Stay tuned to the MAP Dashboard for an article that explores how Tucson is faring in these measures.