The United States Southwest is experiencing what some believe to be the worst drought in 500 years (Kuhn, 2016). Studies have projected that the region will experience a more arid climate and higher risk of water shortages over the coming century (Ault, 2016). Similar to many cities in the region, the City of Tucson is dependent on water supplied from the Colorado River in addition to its own deep aquifer, a non-renewable source.1 This imported supply equates to over 20 percent of the 90 billion gallon annual demand serviced by Tucson Water with approximately 20 billion gallons of Colorado River water transferred a year (Tucson Water Department, 2015).2 Although the Tucson municipality does not expect to have to cut supplies from the Colorado until 2030 (Tucson Water Department, 2015), Colorado River supply shortages may be declared as early as next year (USBR, 2015).  While water resources become scarce, population in the region has grown considerably in the past decades and the growth is expected to continue. In Arizona, the population is anticipated to increase by 25 percent between the years 2012 and 2030, with a 17 percent increase in the Tucson Metro area (ADWR, 2014). The imbalance between available water resources and projected water demands in the coming years presents tremendous challenges for water resource management, necessitating the development of novel strategies and tools to meet the growing demand. Along with many cities in the Southwest, Tucson is faced with a challenge: How can a cost effective, equitable and sustainable water supply be devised for a growing population? What strategies can be used to realize water independence in the region?

To become water independent, Tucson will need to eliminate or offset this imported water dependence through a combination of conservation, water reuse, and expanded alternative sources. Enhancing the use of alternative sources that are local and renewable is one way to balance the water budget and to increase Tucson’s resilience to changes on the Colorado River.3  Rainwater has drawn increasing attention as a possible solution to the local deficit as, in sheer volume, annual precipitation would more than account for all of Tucson’s annual need. As an example, in 2016, Tucson Water supplied over 87 thousand acre-feet (28.4 billion gallons) within the city boundary and adjacent service areas.  In 2016, over 125 thousand acre-feet (40.7 billion gallons) of rain fell within the city boundary, matching the total annual Tucson Water demand by 144 percent. Only less than two percent of the rain that falls in Tucson recharges naturally. To utilize rainwater, it must be locally managed. However, rainwater is a distributed resource that must largely be gathered in decentralized interventions, rather than one large public works construction. Since amounts of precipitation fluctuate in daily volumes and seasonal patterns, active storage must be considered. To leverage this resource, a new model of public works improvement must be developed.

This white paper assesses the City of Tucson’s capacity to achieve water independence using rainwater. To complete this analysis of decentralized system capacity for the total Tucson metropolitan area, the project divides the city into 161 one-mile by one-mile township sections (see Figure 1), each functioning as an independent system. Remote sensing technology is used to isolate the variables of roof areas, material run-off coefficients, monthly irrigation demands of existing vegetation, and impervious land cover. To determine the irrigation demands, the project team created a vegetation classification system of sixteen categories, each isolated through a multi-step LiDAR and normalized difference vegetation index (NDVI) process. Ultimately, a dynamic system model was built to evaluate the storage volume needed to reach and maintain water independent system resilience over a 10-year period in each township section. The 10-year period model is representative of the future mega-droughts that have been projected to occur in the region by recent climate models (Ault, 2016). The project consists of four analysis modules: daily rainwater harvesting potential estimation for passive and active systems (i.e., supply), daily water needs computation for indoor and outdoor (i.e., demand), water independence assessment (i.e., systems analysis balancing daily supply and demand), and scenario and policy analysis through identification of disadvantaged areas/neighborhoods for subsidy consideration.

Figure 1: Total population of each of 161 township sections 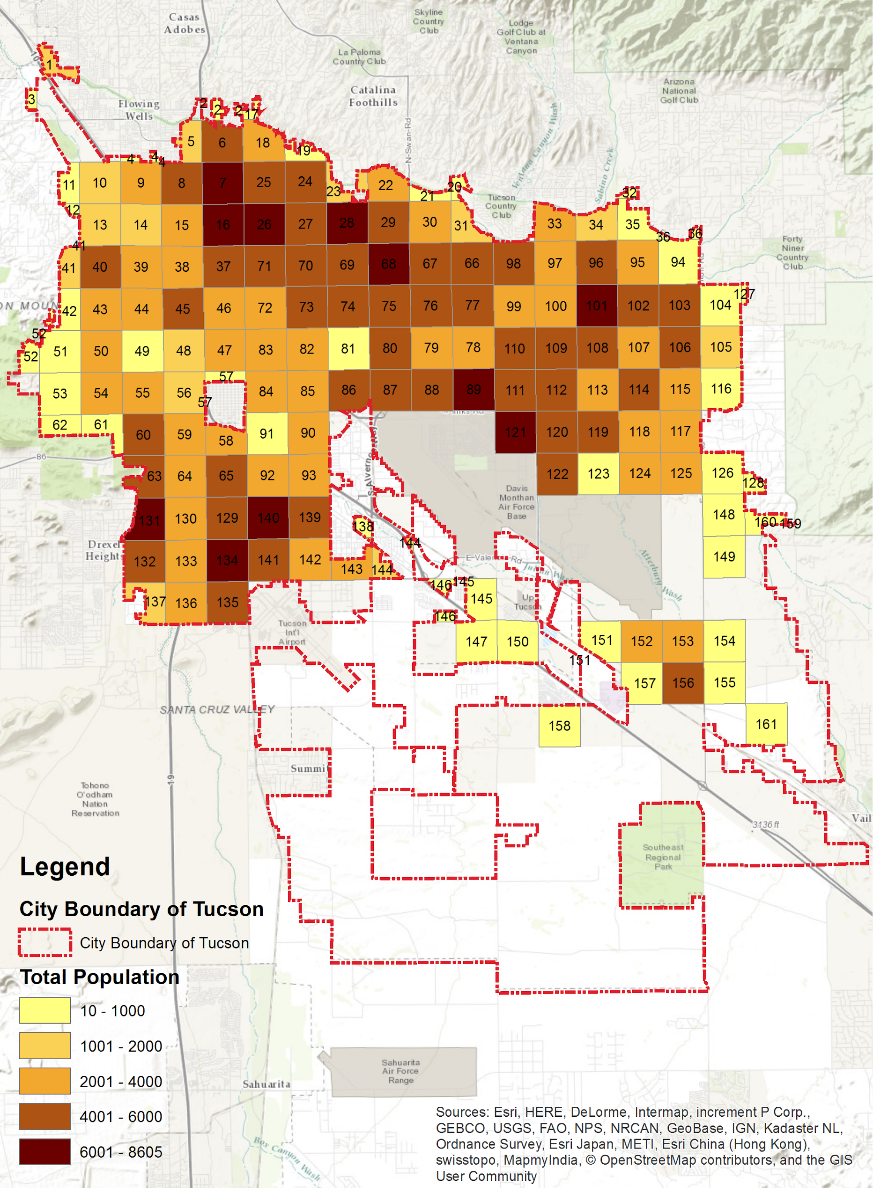 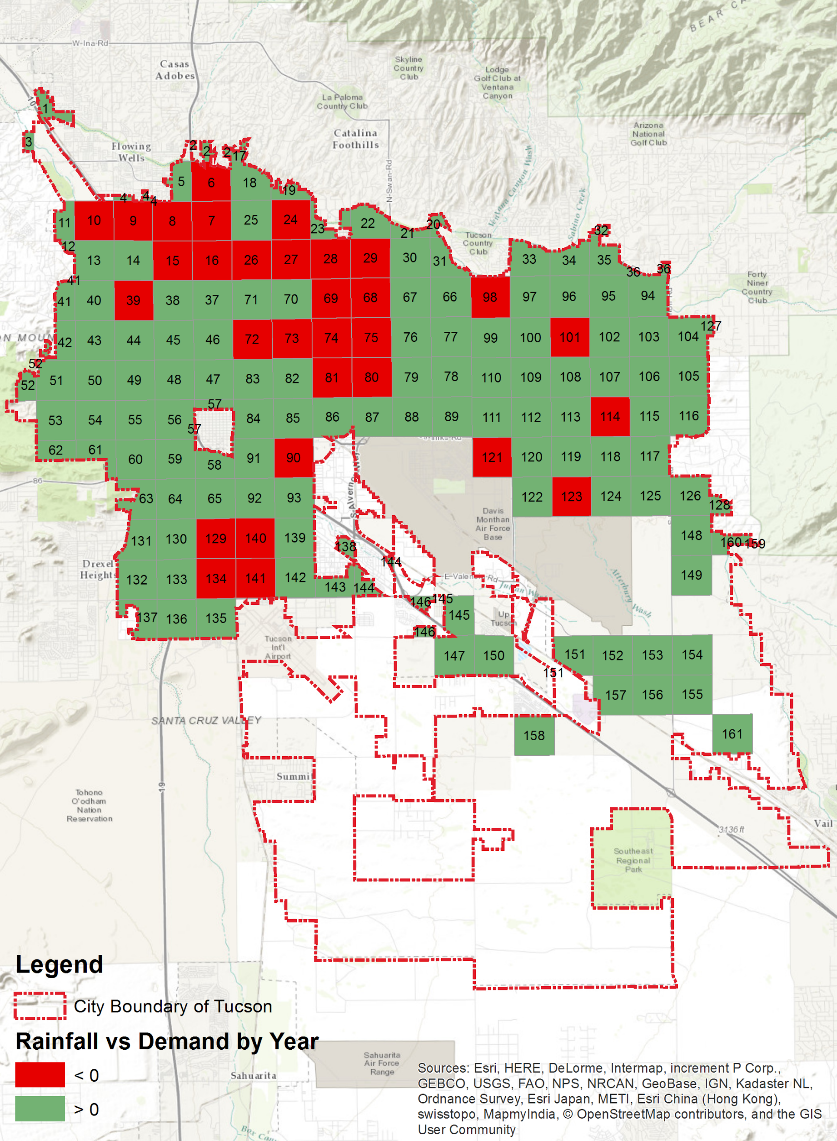 The most feasible case for implementation in the paper is Case B of System 2 (see Figure 3).  In this case, the storage volumes necessary to reach local water budget balance is on average 10,000 gallons per 1,000 square-feet of roof area but vary over the 161 township sections due to differences of per capita water use in various parts of the city. A storage capacity of 1,000 gallons required per 1,000 square-feet of roof area is the lower bound and 200,000 gallons of storage capacity required per 1,000 square-feet of roof is the upper bound. To make decentralized infrastructure intervention practical at the upper bound, significant conservation and cooperative water resource sharing between township sections would be required to lower the required storage capacity.  For relative visual, the average size of a backyard swimming pool is 10,000 gallons. A typical, domestic 10,000-gallon active rainwater harvesting system with a treatment system capable of potable water standards costs $10,000 to install (inclusive of hard and soft costs) (Texas Water, 2017). The financial cost implications of the resultant, required active storage volumes render many of the modelled scenarios impractical, especially for lower income residents without additional incentives. For this assessment, decentralized systems were assumed to require private residential investments. The private residential investment was defined as the cost of constructing the active storage volumes produced by the model. 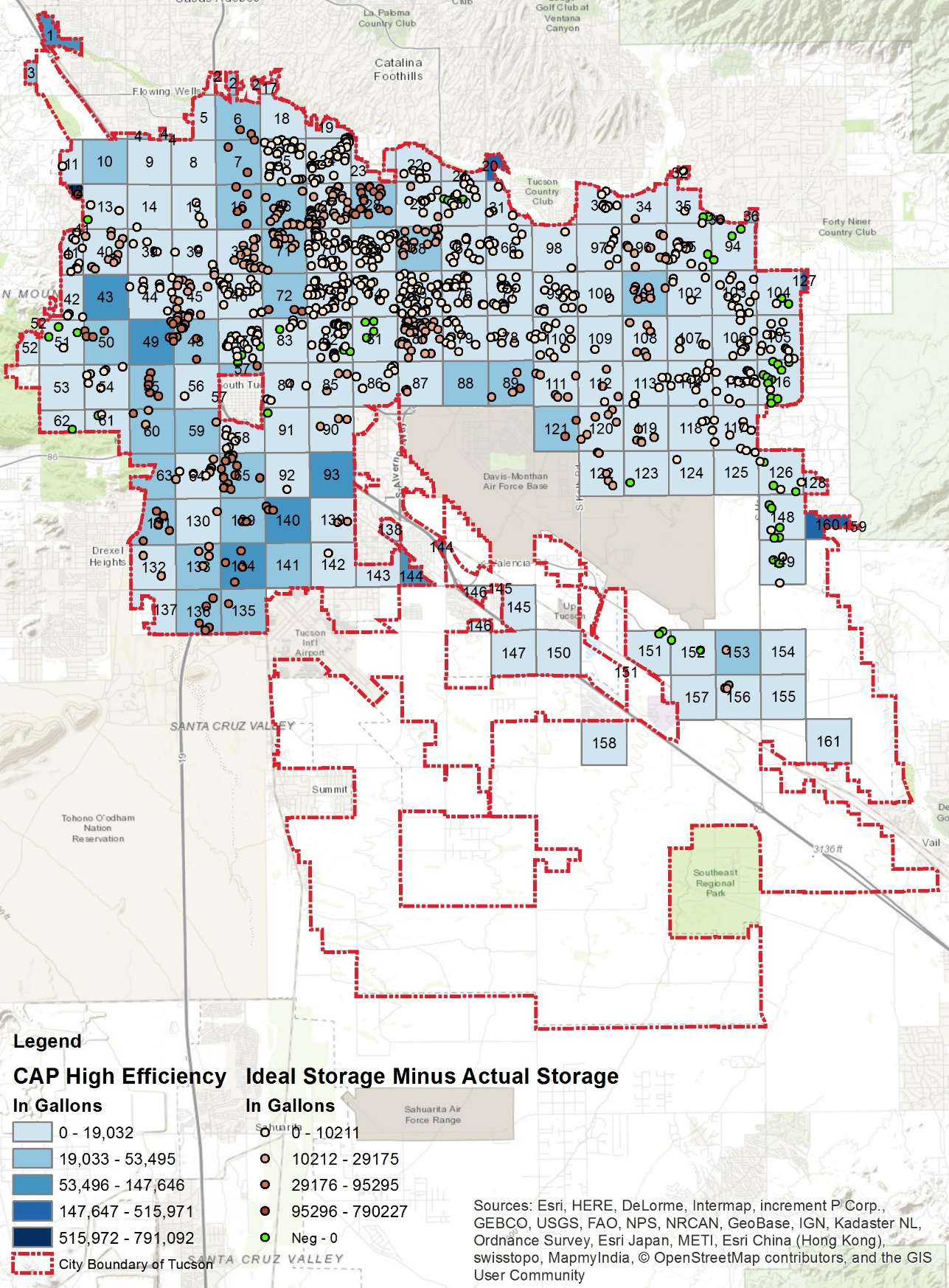 The most promising policy implication provided by this model is in areas of low required investment in storage and high potential societal returns from the co-benefits of rainwater harvesting. Rainwater harvesting has been proven to provide co-benefits such as increase aquifer recharge (Dillon, 2005), positively modify microclimates by increasing moisture content and evapotranspiration (Hamel et al., 2012), mitigate heat island (Furumai, 2008; Coutts et al, 2012), and decrease water system energy use (Jiang et al., 2013). Optimal areas for rainwater harvesting were defined as the township sections with the smallest active storage volume resultants in the model. Due to these smaller active storage requirements, these township sections require the lowest investment to achieve water independence in the model. When these results are overlaid with the current adoption locations of Tucson Water’s Rainwater Harvesting Rebate Program, there is a clear discrepancy between rebate locations and optimal locations. Areas of Tucson with high poverty correspond with optimal harvesting township sections. The study finds significant socioeconomic disparity in the rainwater rebate program adoption and supports recent policy that modified the rebate program to better target its impact and increase its impact on environmental, economic, and social betterment.

[1] Deep aquifers contain “fossil water” recharged over millennia and are not a renewable supply.

[2] The last decade of persistent drought in the Southwest has led to a drawdown of the Colorado River Basin’s largest reservoir, Lake Mead, to critical levels.  Lake Mead’s water volume hovers near the legal level that triggers mandatory cutbacks in downstream supply to junior water right holders, such as the state of Arizona.