The "Manufactured Housing Gap" in Tucson and Pima County: Introduction and Preliminary Analysis

Where in Tucson do insecurity and manufactured housing overlap?

The growing need for affordable housing has sparked renewed interest in manufactured housing (MH) as a way to expand housing options for low-income populations. However, MH remains an understudied, often denigrated form of housing whose residents are subject to unique forms of social, financial and environmental insecurity. These insecurities are especially important to understand in Metro Tucson (Pima County)1 where roughly 10% of all housing units are mobile/manufactured homes—more than twice the percentage found in peer metropolitan areas Phoenix (4.8), Las Vegas (3.3), Portland (4.4) or Los Angeles (1.6) (AHS 2013, 2015).

MH is not an inherently insecure form of housing. However, in Metro Tucson, there is often a wide gap between the merits and promise of MH in theory, and how MH is lived in and experienced by residents. We call this disjuncture between promise and reality the “MH gap”.

This white paper provides insights into the nature and origins of the MH gap in Tucson, but also allows for the identification of specific areas of the city and county in need of the most attention from public and non-profit service providers, resident advocates, industry groups, and researchers.

What are the origins of the MH gap?

Where is the MH gap most severe? 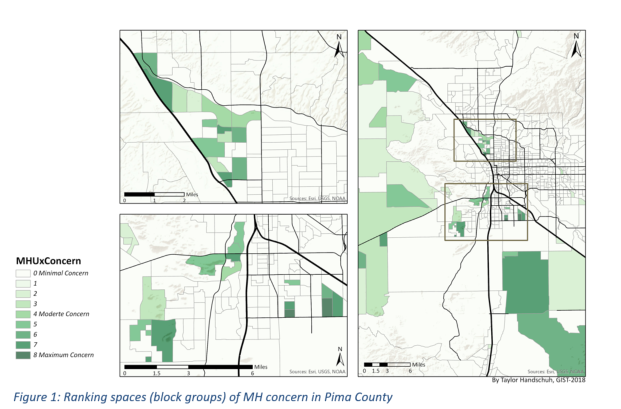 These preliminary findings, while significant, require additional complementary data to produce a more robust assessment beyond what is possible from the analysis of spatial correlations between proxy variables and MH available through public data sources. Figuring out what the most important determinants of MH insecurity are, and how these determinants should be measured, mapped, and weighted, requires qualitative research.

[1] The Tucson Metropolitan Statistical Area is the same as Pima County.