Civility has long been understood as a central element of an effective democracy. From the ancient Athenian forums to modern calls for deliberation and dialogue, a commitment to civil discourse has been viewed as a democratic ideal. In the United States, growing political polarization and the widespread adoption of social media during the past decade have coincided with increased concerns about incivility.

In this white paper, we examine incivility by and directed at elected officials representing the Tucson area across three levels of government on social media. We collected messages (i.e., “tweets”) authored by and directed at 33 elected officials on Twitter from January 2018 through June 2019. The Tucson-area elected officials came from the city councils of Oro Valley, Marana, Tucson, Sahuarita, and South Tucson as well as state and federal representatives whose districts included Pima County. A total of 24,778 original tweets made by local elected officials and 71,638 directed at one or more of these same officials were collected. We then developed a machine learning classifier to detect the presence of incivility -- operationally defined as name-calling. The classifier was used to evaluate all tweets in the sample. Analyses were conducted to examine the prevalence of incivility among different groups and over time. 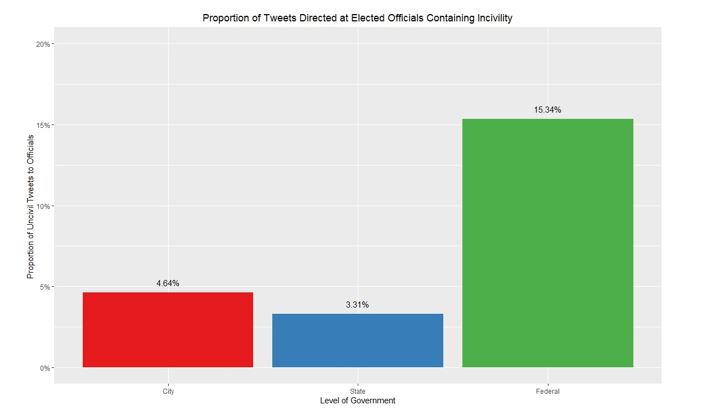