How Rough was the Initial Impact of COVID-19 on Tucson's Economy?

The news is currently full of the devastating economic consequences of the COVID-19 pandemic. This downturn is a result of the physical distancing guidelines deemed necessary by our government to reduce the community spread of COVID-19. So far we have seen a rapid rise in unemployment claims, a reduction in wages through lay-offs and furloughs, declining Gross Domestic Product (GDP), and the permanent closure of businesses.

As we discussed in the “How Exposed are Tucson’s Industries to a COVID-19 Recession” article, not all regions of the U.S. have been hit equally by the economic downturn. The previous article illustrated which industries would most likely be immediately vulnerable to disruptions by the COVID-19 pandemic. The leisure & hospitality sector was identified as one of the industries most at risk. In 2019, the Tucson Metropolitan Statistical Area (MSA) had 44,617 jobs in the leisure & hospitality sector, representing 11.2% of total employment. That positioned Tucson in the middle of its peers in the percentage of jobs that were in the leisure & hospitality sector. While no region in the nation will be untouched by the COVID-19 pandemic, some areas will experience a more significant impact than others depending on their industrial mix.

As the first bits of economic data become available for March and April, they will help shed light on how much damage has been done to the U.S. economy, and how that loss was spread across the country. A recent report from Brookings, “Which city economies did COVID-19 damage first?” explored the data released by the Bureau of Labor Statistics (BLS) on unemployment through mid-March. The BLS report indicated that the U.S. economy lost 701,000 jobs between mid-February and mid-March, increasing the unemployment rate from 3.5% to 4.4%. It is important to note that many states did not begin stay-at-home guidelines and the closure of non-essential businesses till mid-March. According to the Brookings report, the job losses seen through mid-March were concentrated in very large metro areas (see Map 1). These losses were concentrated in regions that acted early to limit community spread of COVID-19 or areas that were early epicenters of the pandemic (like New York). 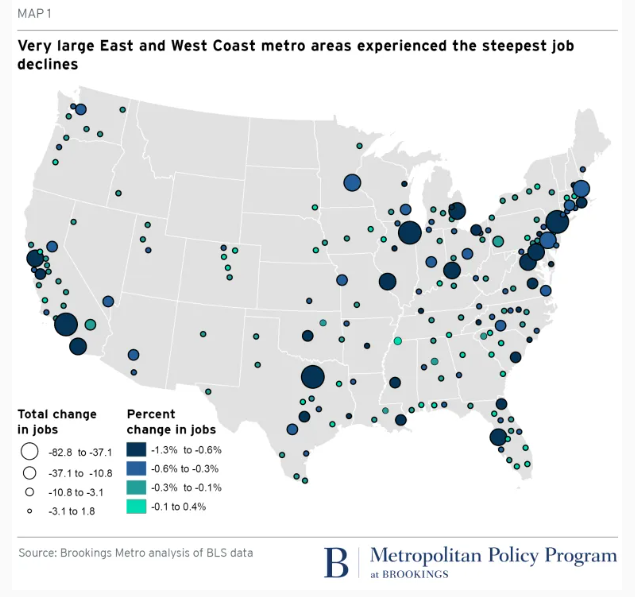 Las Vegas also posted the largest increase in the unemployment rate rising by 2.8 percentage points, from 3.9% in February to 6.7% in March. As noted earlier, in the article exploring those industries that are most vulnerable to COVID-19, Las Vegas was anticipated to be hit hard early on in the downturn. That is because 33.8% of employment in Las Vegas is concentrated in industries deemed high-risk (such as leisure & hospitality). Tucson’s unemployment rate increased by 1.0 percentage point between February and March, while Portland’s rate remained unchanged (Figure 2).

Figure 2: Percentage Point Change in Unemployment between February and March

This is just the beginning of the discussion on how the COVID-19 pandemic has impacted our region’s economy. Stay tuned for a detailed article on Arizona’s unemployment rate in April as the data becomes available in late May. To learn about the U.S. labor force characteristics check out the recent AZ Economy article.