How Food Insecure is Tucson?

The COVID-19 pandemic has had wide-reaching implications worldwide from serious health consequences to increases in food insecurity. The World Bank’s recent brief “Food Security and COVID-19” estimates that 265 million people worldwide could face acute food insecurity by the end of 2020, up from 135 million people before the COVID-19 crisis, because of income and remittance losses.

Food insecurity is defined by Feeding America as a household’s inability to provide enough food for every person to live an active, healthy life. Food insecurity is one way we can measure and assess the risk of hunger in the United States. Prior to the COVID-19 pandemic, approximately 14.3 million (11.1%) households in the U.S. were food insecure. This was down significantly from the years following the 2008 recession when food insecurity rates were near 15%. In the U.S., Feeding America estimates that the number of individuals experiencing food insecurity could increase by up to 17.1 million due to the pandemic.

The U.S. Department of Agriculture (USDA) maintains a Food Security Dashboard that provides a wealth of information on the U.S. Figure 1 highlights the U.S. trend on food-insecure households. The USDA dashboard provides data at the household level on the social condition of limited or uncertain access to adequate food. Additional data on the USDA dashboard includes trends by race and ethnicity, and for households with children. In the U.S., Black and Hispanic households have much higher rates of food insecurity than white or other race households. 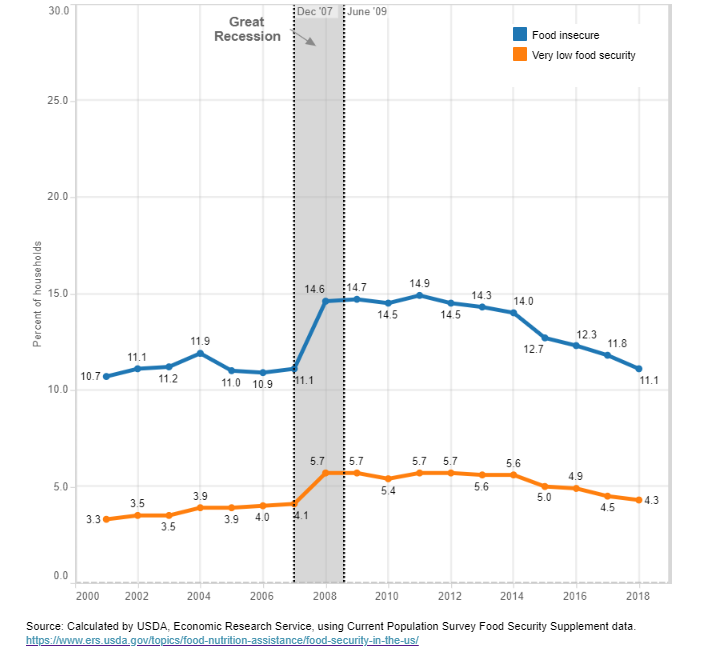 Map the Meal Gap provides state and county-level data on the percentage of the population who did not have access to a reliable source of food during the past year. In Arizona, 979,170 individuals or 14.0% of the population was considered food insecure during 2017. That placed Arizona with the third-highest rate of food insecurity among the western states (see Figure 2). New Mexico had the highest percentage at 15.5%, while Colorado had the lowest at 10.6%.

An additional measure of food insecurity is access to food. The USDA reports data on the percentage of the population who are considered low-income and do not live close to a grocery store. Proximity to a grocery store is defined differently in rural vs non-rural areas. For rural areas, it is defined as living less than 10 miles from a grocery store and in non-rural areas is less than one mile. A family with an annual income of less than or equal to 200 percent of the federal poverty threshold is considered low income for the USDA’s food access measure.

The metropolitan areas compared in this article ranged between three and 10 percent with Tucson’s rate at 7.7%. Among the Arizona counties wide variation existed with a low of 4.4% for Maricopa and a high of 47.4% in Apache (see Figure 5). This variation was driven by the vast differences in rural vs non-rural areas in Arizona and variance in income across the region.

The MAP Dashboard will continue to explore the impact COVID-19 has had on food security as more data becomes available. Child food insecurity is a particularly important topic recently as recent data shows that households with children have been negatively impacted by the financial implications of the pandemic. A recent MAP article “How Food-Secure are Tucson’s Children” explored the food security status of children in Tucson.